🗃 Who are your mentors? And, the Kashaya Pomo fileslip that keeps me going

I imagine a lot of you have “relationships” with the linguists who went before you in studying a particular language. You get to know people when you pore over their work, even if you never got the chance to meet them, even if they passed away before you had ever heard of the language.

For me one of those people is Robert L. Oswalt, who passed away in 2006. He worked with the speakers of a language called Kashaya Pomo for the entirety of his adult life, and I mean the entirety. (In addition to almost all the other Pomoan languages — our own @neilalexanderwalker is the real expert around here, he recently published a grammar of Southern Pomo.

Here’s a site about Oswalt created by his son, with some cool pics of Oswalt and members of the Kashaya community, including especially the rather legendary Essie Parrish:

Anyway, I wanted to share one particular fileslip that I think about a lot. It’s archived at the Survey of California and Other Indian Languages / CLA. This slip is one of… well, 15,583 JPGs that continue to eat up my hard drive. (I know because I took those pictures. It took a while.) What’s amazing to me about this little piece of paper is how much history it contains, not just of the language itself, but of the fieldwork on the language. 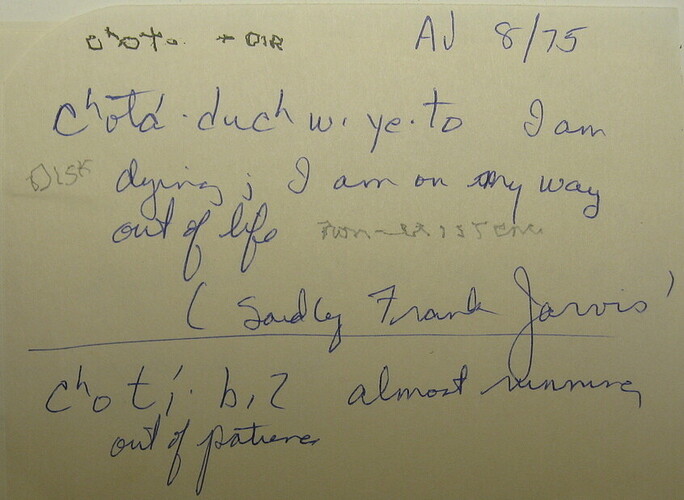 As I mentioned, Oswalt (or RLO, as Pomoanists sometimes refer to him) worked on Kashaya his whole life. This little file slip has annotations from 1975, and the early 2000s. We can identify the notes from the early 2000s because they are written in a shaky hand — sadly, Oswalt suffered from Parkinson’s disease at the end of his life.

So there are two sentences here:

cʰota·ducʰwiye·to
I am dying; I am on my way out of life.

The sentence was spoken in 1975 by speaker AJ (Anton James, I think.) But he was quoting someone from an earlier generation, Frank Jarvis. That speaker was only spearated by a generation or two from people whose memories extended before contact with Europeans. (Russians, actually! At Fort Ross.)

RLO made two annotations to that sentence in his waning days: one, he noted that the form could also be interpreted to mean something like on my way into non-existence (my memory of Kashaya morphology is foggy at best, @neilalexanderwalker can tell you about that I’m sure). So, three generations (and I guess four we include ourselves!) are pondering the nature of mortality.

And then, there’s that one more annotation, on the left, in shaky all caps.

What did RLO do at the end of his life? What was on his mind as he updated his translations of this sentence about the end of life?

Digitizing the archive of these peoples’ words.

Anyone else want to share some thoughts about their mentors, past or present?

Oswalt was an amazing scholar and real hero to me. I was privileged to know him from 2002 till his death a few years later. He did a tremendous amount of work on Southern Pomo, and my phonological understanding I’d the language is almost entirely due to his analysis of Southern Pomo.