I feel like this site is a gem of web documentation which doesn’t get quite enough attention: 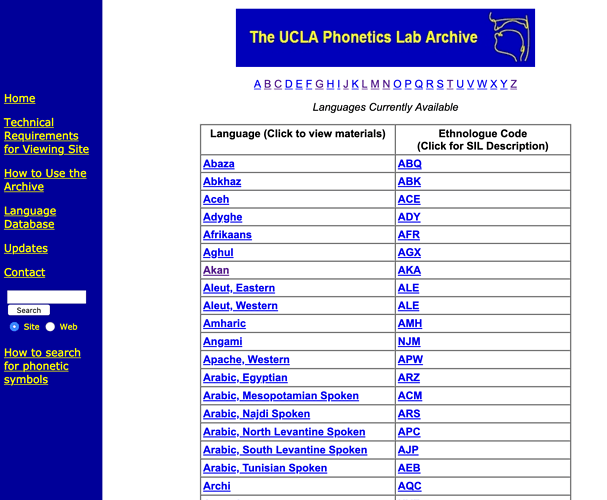 There is a ton of stuff here. (See the whole list of languages — 315!!) UCLA has a long tradition of research in phonetics and phonology, and this site is a lovely archive of that.

A fairly unusual aspect of this archive is that the whole thing is under a Creative Commons license, specifically this one:

This means that as long as you’re not making money off the archive, you can create — indeed, you are encouraged to create — derivative works.

Once data is digital, assuming reuse is permitted, it becomes raw material. It can be reshaped, repurposed, recombined, re-lots-of-other-things.

Given its size, it is not surprising that certain language families show up more than once in this archive. One that caught my attention was the Fula or Fulani family, of which there are 5 representatives:

Fulani is a fairly major language and I’m sure there are other documentary resources out there somewhere, but even so, it’s not hard to imagine some comparative work with this content.

It would be fun to try doing something like that down the road, but for now let’s just take a tour of what is available for a given language here.

The specifics vary from language to language, but in general the types of data archived include:

At least some metadata:

A scan of the original fieldnotes: 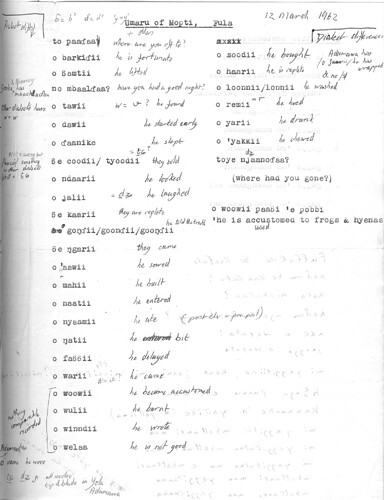 Which have since been input in a Unicode IPA transcript (nice!):

As you can see there are a few missing forms (although, listening to the recording, some of the missing forms were actually said).

Anyway, you get the idea. There is a ton here. It’s not hard to imagine derivative projects: what do you imagine?

This is so neat!! Thank you for sharing, I’m honestly surprised I hadn’t heard of this specific archive/db just from my chronic hoarding.
The first thing that comes to mind is the noise in these recordings, which is reasonable given the time period. But it would be neat to see how the noise shows up and trying to learn how to manually use filters and noise reduction in some basic software like Audacity (I think Praat has denoising capabilities too, so all the better). I’ve certainly found myself confused about how denoising cut out certain things.