🎙 Podcasts or other audio stuff to listen to?

I thought I’d start a topic with links to stuff to listen to if, like me, you value an occasional walk with your headphones. Or if you’re doing the dishes. Or whatever.

A few of my own suggestions:

Hi @Hilaria! @gabrielsavi, @jasnathanmartin, @Sandra and anyone else interested in creating learning materials for kids should check this out. Also some interesting discussion of

This whole podcast is awesome, if you haven’t heard of it.

Bill Croft was super awesome in this episode. He’s totally respectful of the art of conlanging, and gets into a lot of deep discussion with the hosts. Highly recommended. Psst, @meaganvigus, have you heard this?

1 Like
:studio_microphone: Fieldnotes Podcast Episode 15: Rethinking the ‘field’ in Fieldwork with Hannah Gibson
sunny April 23, 2020, 5:35am #2

Distributed Morphs is a cool one about…Distributed Morphology! I like that it’s bite sized hour-or-so segments to learn about something that I don’t really feel invested in as someone who tends to lean very functionalist. It’s nice to lend an ear to the other side and this is a great way I found to try that! (It’s also on Spotify, so that’s convenient)

Field Notes is one about linguistic fieldwork that was recommended to our documentation seminar by a student, and although I haven’t gotten to listen to it, I do trust her recommendations generally! (Unfortunately not on Spotify)

Roots and Stems is a podcast about indigenous language revitalization and I’ve only listened to one episode but I enjoyed it! (It is on Spotify, which is where I linked to)

Linguistics After Dark is a podcast created by some folks who seemed to have met at some book convention?? and they answer questions but the catch is they can’t look anything up, so it’s just silly and casual. It’s somewhat disappointingly pointed at a more general audience so sometimes it gets a bit didactic which is not what I’m looking for when the didactic component is at the level of “a phone is different from a phoneme in that…”

As for non linguistics, I am really into RadioLab which I guess makes me Basic or something
In a similar vein, I like Invisibilia which is kind of a similar concept to RadioLab, deeper dives on general interest topics.
Throughline is specifically history, but thankfully it’s not a super white-washed, Eurocentric history. At least not the ones I’ve listened to.
Escriba Cafe for when I want to listen to something in Portuguese (although I’ve been watching Community on Netflix in Portuguese which has been awesome–Spanish dubs tend to favor a style of voice acting I have trouble enjoying, but Portuguese dubs are great!)
Penumbra is cool noir fiction but without the rampant misogyny.
I’m a huge fan of Critical Role, which is a DnD podcast, but it’s a lot to get into it (4 hour episodes…and the current Campaign is 99 episodes in. If you start now, maybe you’ll catch up by the time they resume after COVID-19 becomes less of a problem)

this is amazing! So many great links. And a podcast about fieldwork?? Thanks!

Well this is certainly topical: 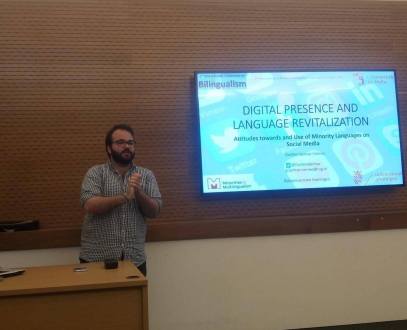 Ep 14: Fieldwork in the Time of COVID-19 with Guillem Belmar

Today’s episode is Guillem Belmar, a Linguistics PhD student at UC Santa Barbara. In this episode, we discuss the impact of the COVID-19 crisis on fieldwork. This discussion was inspired by U…

@aventayolboada or @gabrielsavi or @Sandra or @kpalakurthy, do any of you know Guillem? We should see if he wants to hang out here

I keep a list of linguistics/language podcasts. I’d probably second @sunny’s summary of what’s directly relevant to the jobbing linguist. Some others you could listen to and pretend you’re working:

@sunny Thank you SO much for including Field Notes in your list, you can find Field Notes on Spotify here: https://open.spotify.com/show/5QZLnR2tJiUQQpfHLioQzW

Richard T. Griscom is on the Field Notes podcast this week, discussing technology in the field. If that’s your thing, you can find the episode here. Or alternatively on your fave podcasting app (all the ways to listen found here).