💬 Looking for examples of online phonetic inventories with audio

I’m trying to build a collection of examples of phonetic inventories with integrated audio playback. (What should they be called, anyway? “Audio inventory tables”? “Playable inventories”?…

Here’s a screenshot of a nice audio/sound chart for Northern Pomo: 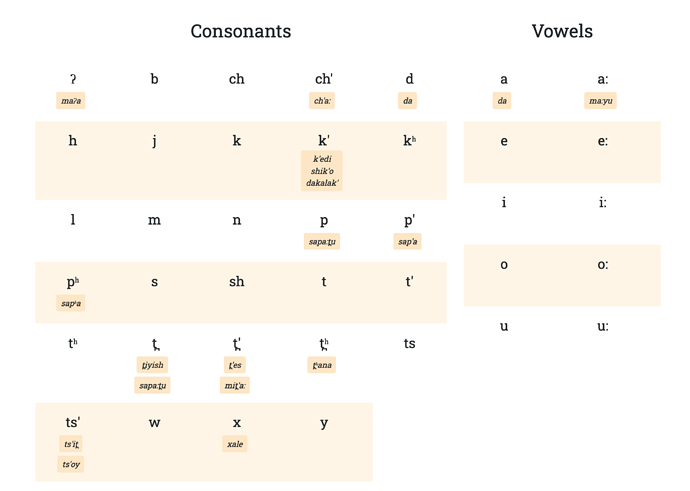 I like this one because it’s so clean and straightforward — I can imagine it being very useful for someone trying to familiarize themselves with the Northern Pomo sound system. The fact that some of the sounds have integrated video of example words makes this resource… well, epic. 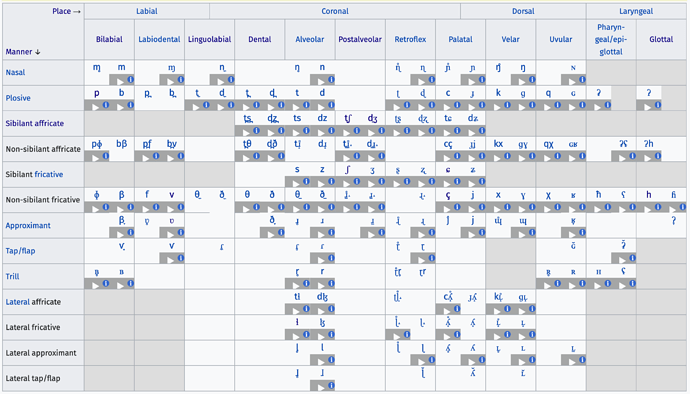 The International Phonetic Alphabet, or IPA, is an alphabetic system of phonetic notation based primarily on the Latin alphabet. It was devised by the International Phonetic Association as a standardized representation of the sounds of spoken language. In the IPA, a pulmonic consonant is a consonant made by obstructing the glottis (the space between the vocal cords) or oral cavity (the mouth) and either simultaneously or subsequently letting out air from the lungs. Pulmonic consonants make up ...

I know there are a lot of these online and I thought it might be useful to just start a thread here to collect a list. I was wondering if any of you would be interested in discussing such interfaces a bit.

Some food for thought:

I was talking about this sort of thing with @Siri in the context of Alaskan languages, and now I’m kind of nerding out about them… hope the topic is of interest to others here!

Another one, for Kashaya Pomo:

Sound didn’t seem to work on my iPhone. I’ll try it tomorrow when I’m recovering from this insomnia.

Oh, this is one of several:

I use this when IPA is driving me crazy: https://jbdowse.com/ipa/

(Also, slightly annoyed that the “Indian” chart has apical dentals, but not laminal dentals! Should have both

What’s the notation for a laminal dental?