I’ve been working for a while on an annotation app I call Glam, which is finally approaching an alpha release. I’ve worked on with particular attention paid to its possible uses for language documentation, but it is intended as general for any kind of linguistic annotation. I’d like to hear your thoughts on what I have so far as I complete work on the foundations.

Introduction
As many of you here know firsthand, the apps we have for annotation today are held back by two problems: they are often tailored for certain domains, being annoying or impossible to use in other circumstances; and they have major usability issues which are rooted in outdated or poor engineering decisions. With Glam, I’m trying to tackle both problems: Glam has been designed to be universal in applicability across different domains of the field of linguistics, and it has been built with solid, modern engineering practices.

Universal Data Structures
How can the data structures be universal? The strategy is very simple—there are only four fundamental data structures: texts, tokens, spans, and relations. Texts are simply sequences of characters, and tokens are subsequences of texts. A span is a grouping of one or more tokens, and a relation is an edge between two spans. That’s all. You might be skeptical that this is really enough, but it’s been shown (e.g. by Jiang et al., 2020) that virtually all common linguistic annotation schemes are expressible using these basic elements.

Every project in Glam, then, is configured using these basic elements. Consider for example how a project set up for parallel English–Turkish text might look: there are two text layers, the Turkish layer has two token layers (one for morphemes, the other for words), and all the token layers have span layers underneath. If you’ve used ELAN, this sort of configuration will be familiar to you: the four building blocks are used as your project requires them. 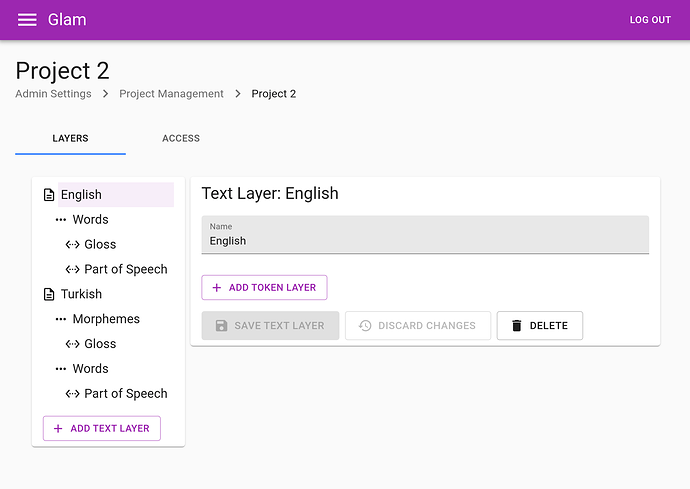 Documents will then have contents according to this configuration. Here’s a simple example, with just a single text layer, token layer, and span layer each: 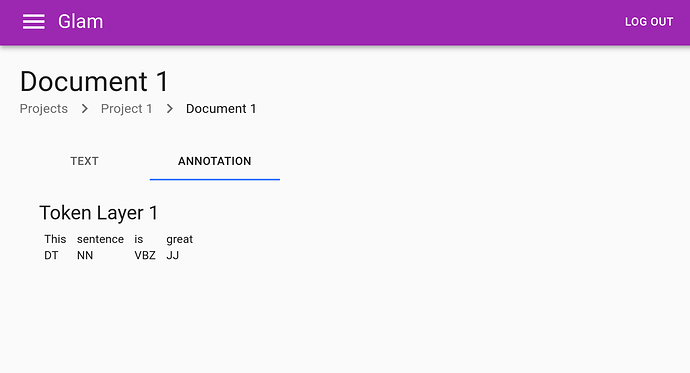 Modern Engineering
I’ve made engineering decisions with an eye to (in order of decreasing importance) correctness, usability, universality, and efficiency in making Glam. Glam is implemented as a modern single page web application (this is the same class of apps that e.g. Twitter and your credit card website are in), and all the expected features exist: a full user system with project-level read/write permissions, an admin panel, automatic data synchronization, a clean and consistent UI, and more.

In addition to these benefits which are of fundamental concern, there are also a lot of nice-to-have features I was able to get along the way (disclaimer: some of these aren’t totally implemented yet, but I am confident they will be achievable with low effort

Problems
There are problems left to be solved, of course. A few of the standout ones:

Conclusion
I hope at least some of these ideas are exciting, and I’m looking forward to any comments you all might have. Please leave a reply, and if you’d like me to keep you posted with development updates please let me know. You can find the code here: github.com/lgessler/glam

This is so great @ldg, thanks for sharing your project here! Please do keep us informed on your progress.

For me it was particularly interesting to see how you’ve established a set of goals for your work. I think this is a very helpful step, because otherwise the range of possibilities is just too vast. Correctness in particular is a goal I myself am in no way capable of setting in my own work

The admin, collab, and authentication layers are things that everyone needs but are so hard to implement and keep running, so that’s huge.

The time-travel feature sounds pretty mind-blowing. I have never heard of Crux, very cool. Planning to spend some quality time trying to learn from your code!

Incidentally, I tried but didn’t manage to get it running, but I suspect it’s because I have a borked node.js install. (Been living in deno.land lately so I’ve kind of let my node chops fade.)

This is fascinating! Certain “Google Docs, but for linguistics” is a pretty compelling tagline. The current options for collaborating on interlinear analysis are pretty messy.

I don’t have experience setting up a web server, but I’m fairly savvy so maybe I’ll give it a try when you do the alpha release. Keep us updated!

For me it was particularly interesting to see how you’ve established a set of goals for your work. I think this is a very helpful step, because otherwise the range of possibilities is just too vast. Correctness in particular is a goal I myself am in no way capable of setting in my own work

Believe me, they were vague/non-existent at the start and what you see here is a product of back-rationalization

. Thanks for the kind words.

Incidentally, I tried but didn’t manage to get it running, but I suspect it’s because I have a borked node.js install. (Been living in deno.land lately so I’ve kind of let my node chops fade.)

I fleshed out the readme a bit more, so maybe that’ll help–otherwise though, I’ll be making a first release probably by the end of this week, and then all you’ll need to do to get it running is java -jar glam.jar on the command line.

This is fascinating! Certain “Google Docs, but for linguistics” is a pretty compelling tagline. The current options for collaborating on interlinear analysis are pretty messy.

I don’t have experience setting up a web server, but I’m fairly savvy so maybe I’ll give it a try when you do the alpha release. Keep us updated!

My brain isn’t awake enough yet to make a useful comment except that this looks super cool and I’m excited for it to be released so that I can play around with it! I’ll be (hopefully) doing fieldwork in 2022, so maybe it’ll be up by then?

Gotta run out the door now so I can’t write much, but I thought I’d share that the bare minimum for interlinear annotation works now, e.g. for POS tagging. See the release more: Release v0.0.1-alpha.0 · lgessler/glam · GitHub

Very exciting, Luke! It would be great to have an online session sometime, too, where you can walk us through how the app works with a screen share.

I second this notion🤚

Hi folks! I finally have a beta release for interlinear glossed text editing, and I’d love it to show it to you all. Once it’s undergone some more testing, I think it’ll be ready for use in real projects. At the moment, it’s capable of live, collaborative editing of IGT in a central web application, Google Docs style. Pictures might be more communicative than words, so here’s an example of a document, showing what its text, token, and IGT views look like: 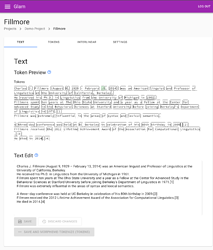 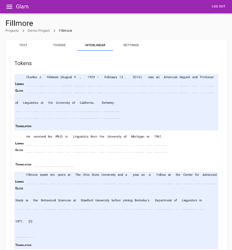 I’d be very grateful for feedback especially as I think about what to prioritize implementing next, so if people are interested in a live demo I’d be happy to put one on. I’ll also eventually be writing documentation and making a few demo videos, though that moment isn’t here yet.

Edit: and oh yeah, I have a live demo available at https://demo.use-glam.app/. If you’d like to log in to look around, you can use the read-only account:

Thanks a lot for all your work and for sharing this!

Same - I’d be very interested in a live demo when that’s ready!

Please keep us in the loop — if you’d like to use this site to share screencasts, run demos, post tutorials or whatever, ¡nuestr-a casa es su casa! *

I would be interested in a demo showing examples that are glossed! Also, can you tag each entry (e.g. “negation”, “greetings”), and is it possible to implement a separate line for the discourse context?

Hi all! Probably I’ll put together a short video in the next week—will share it here when I’m done

Very much looking forward to it! I hope we can have a Q&A after.

Looking forward to it!

OK, here’s a video I slapped together—let me emphasize again that this is all still a WIP and things you see in here might be slightly buggy, visually confusing, or incomplete. Polish will come later

Luke - this is a brilliant introduction to what looks like a project that required a LOT of work and a LOT of thinking. Even with this basic intro, I can already get a sense of how this could fit into my own projects (working with decentralised teams, involving people with different kinds of expertise, allowing people to contribute from mobile devices only…)
You know that my position is somebody working on low-resource languages, working mainly from audiovisual recordings from ELAN, then to FLEx. The connection that Glam promises with NLP is really exciting, and I’m interested to see how that fits in.
I’ll end by asking a couple of questions (with the risk of being silly or impertinent):

Otherwise, I’m keen to see more! I think this is really promising, as the problems you seek to address are indeed real problems, and your ethos of making things durable, open, and modular (in that people can build parts on to Glam) is really exactly what I’d want.

Thanks for the encouragement, Andrew!

Re: 1, I’ve thought a bit about this. Let me say first of all that if there was a clear answer here that people wanted (e.g. focus on becoming feature-competitive with FLEx, or feature-competitive with ELAN) then development could be reprioritized. That said, in the absence of much feedback from real documentary linguists I think I’ve been working towards making Glam a worthy substitute for FLEx for relatively “light” users, e.g. people who need a solution for a semester-long field methods course, or a relatively simple documentary project. In parallel I should also say that being able to import data from FLEx or ELAN is a relatively near-term goal that I would probably prioritize even higher if people wanted it.

If you have any thoughts yourself about where and how Glam and its future iterations might be able to fit into your workflow, I’d be interested to hear them. E.g. maybe if it turned out that it would be fine for you to first do some alignment and coarse analysis in ELAN before importing data into Glam, that’d be interesting to know.

Re: 2, you didn’t miss anything, that’s just not yet implemented. That’s a very important feature I know, so I think that is next on the to-do list once I implement vocabularies (which will be able to accommodate lexical inventories), and I’m also planning to make it extensible: there should be a serviceable default based on some reasonable heuristics, but if you want to provide your own parser/resolver that can automatically take vocabularies and add links to lexical items in a document’s tokens, that should also be possible. (It’d be a bit of code of course, but so it goes!)

I should also mention, if anyone on this forum would like to collaborate on this with me it could really benefit from another brain or two, and we could work towards some publications

. I’m not even thinking code, necessarily (though if you can code I have ideas for relatively isolated contributions in the frontend that could be made without having to understand the guts of the system)—there are lots of design and data questions that I’ve been neglecting.