Garrwa/Garawa/Karawa (And an aside on <frame> in HTML)

Here’s another example of endangered web documentation: a site on the Australian language [Garrwa](Garrwa language - Wikipedia — I happened upon in another “endangered resource”, this important project on digitizing interlinear text, which is also available only in the Wayback Machine! Ugh!

As indicated in the screenshot and URL, this content appears to be available only in the Wayback Machine. Which is a shame, because there is a lot here: recordings, grammatical information, texts, and especially lexical information (in Toolbox format).

(Sometimes I feel like we should try to do something about stuff like this — to help the creators who made such content and try to help them bring back their content in a more future-proof way, with a path to expansion. Mary Laughgren, for example, is active at University of Queensland, so the thing to do would be to email her.)

If you look at the source of this page (doesn’t everyone?) you will notice an interesting thing. You don’t actually see the content which is visible on the screen, you see just the following content — a bunch of <frame> and <frameset> tags that have URLs indicated in their src attributes.

The <frameset> divides the screen up into panels, and the <frames> indicate which external HTML page should be injected into each panel. This page has some CSS rules that
This sort of thing was all the rage in the earlier days of the web, but it’s now considered a no-no. The idea of injecting specific content into a “panel” of a larger pane isn’t bad, but there are some practical consequences that can make content using frames less that other approaches: one particularly troublesome one is that the URL of the page doesn’t change when you select a subsection. For this reason, I can’t actually link you to a particular “state“ of the frameset, even though that page exists:

So for instance, I can’t link you “in” the section called “background information”, because that page exists outside the frameset, in a sense.

This problem is significant enough that browsers have added work-arounds. In the case of Firefox, you can see the “This Frame” option in the drop-down menu in the screenshot below: 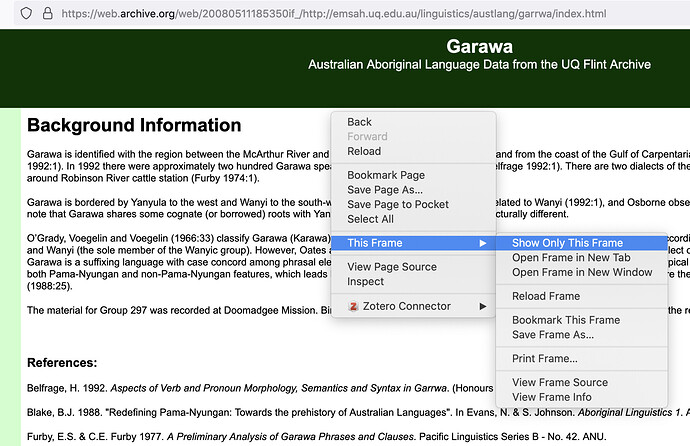 There is a non-deprecated tag which fulfills a similar niche, <iframe>.