I’m looking into the Endangered Languages Documentation Programme (ELDP) grants, but I can’t find a definition anywhere of how they define the term “endangered language”. Does anyone know what metrics are used for language endangerment / could anyone share experience of previous applications being accepted/rejected based on this criterion?

(I’m assuming there are some definitions/criteria as about 6 years ago a friend emailed ELDP enquiring about Small Grants funding for a project on a Swedish South Saami dialect, and we got a response back advising us not apply as it was unlikely to be funded, on the grounds that there was already an ELDP project on a South Saami dialect (so our proposal wouldn’t meet the right balance of endangered/underresearched))

I’ve had an ELDP grant rejected because Ende (a language of 600 people in Papua New Guinea) wasn’t endangered enough and was sufficiently documented (I had conducted one two-month field trip already and archived with another institution).

My first ELDP grant was rejected because the amount of work I proposed to do was “so much work that it would be unethical to the community to overwhelm them with such a workload” (I suggested getting 20 hours of speech over a two-month period). My counterpart in the next village over got the grant. He proposed collecting 2 hours of recordings. I collected nearly 40 hours (and transcribed 20) in my first trip and proposed collecting 4 hours on my second trip. That’s when I got rejected a second time, that the language was already sufficiently documented.

On endangerment and level of documentation, you can get a sense of what criteria are relevant by checking out this Harald Hammerström blog post: 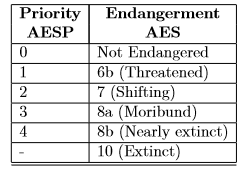 ‘Which Language Should I Document? Some concrete suggestions from diversity...

You do need to argue for why this language is considered “endangered” and there are many factors you can take into account. If there are a lot of applications for more severely endangered languages, you’ll be out of luck.

Looking back at my old ELDP small grant applications, I first proposed 2 hours of fully annotated recordings (alongside other activities) and that proposal was seen as too ambitious. My copy of my 2nd proposal says just 1 hour (!) of video, but my progress report said my goal was 15 hours with 1 hour annotated and I have a vague memory of that change happening in discussion with ELDP after the application.
I ended up with 17 hours of recording and like 3 hours of annotation despite some challenges during the project.

This was all 5 years ago so expectations for grants may have changed since then. The safest thing is to articulate how you came up with the number of hours you want, and give any evidence you have for believing that it will be an achievable goal.

In my experience as both an applicant (successful and unsuccessful) and reviewer there are no hard and fast criteria because each context is unique and it’s up to you to make a case for the importance of your own work. You can use existing survey and database information about population and level of endangerment, but you might also be working on a specific dialect that’s been underdocumented, or a set of endangered genres or traditional knowledge that is particularly endangered even though the language is still in general transmission. ELDP are generally pretty good at having info sessions and office hours in the lead up to grants, so getting a sense of how to refine your proposal is really helpful!

Thank you all for the replies, very helpful! Given the different definitions around, I had hoped for some official criteria in order to avoid involving community members in applications that are never going to be funded. But hopefully a case-by-case basis can also be positive…

I was involved in supervising a successful ELDP postdoc grant in the current cycle. I can provide some comments based on our feedback if you need these specifically, Lis. (The context is likely quite similar to yours since it’s actually only a few kilometers away, I think - the southern Bamileke area just northeast of Basaa.) I’ll expand on what we used as criteria for endangerment below - for Cameroon these are quite small languages and we could clearly demonstrate that patterns of usage and the recent history of the region point to rapid loss of the languages in this area.

The project will do basic documentation and documentation of language usage patterns (esp. multilingual patterns that are contributing to endangerment) in roughly three Bamileke languages spoken at the very southern end of the Grassfields area. I say “roughly three” because one of the points in favor of this project is that the core of the project, Kwa’, is not documented at all, and could actually be two or three languages; Glottolog 4.5 - Kwa'. We estimate a few dozen to a few hundred speakers but, other than knowing that elderly speakers exist, we don’t know how many there are. Intergenerational transmission was likely interrupted during Cameroon’s civil war immediately after its independence (the “Maquisard War”), during which time the Kwa’ area was a rural backstop for the losing side of the conflict; it was subject to a scorched-earth campaign and the area was depopulated almost entirely. It’s not clear if transmission ever came back.

The project is also seeking to do work on southern Nda’nda’ (Bazou), which we estimate has 3,000-5,000 speakers and is in the middle of a rapid shift to Medumba, an adjacent Bamileke language. (Medumba is used everywhere other than the home, and many parents use Medumba with their children; we think intergenerational transmission has basically stopped or is close to stopping.) This situation is quite unusual in Cameroon, which I think was a point in the project’s favor.

So tl;dr - endangered in context and we could clearly demonstrate that with specific references/history lessons; one of the languages being undescribed also probably helps.

Thanks Matt, that’s really useful to have as context. Sounds incidentally like a very interesting project, so I’m glad to hear it was successful. Thanks also for the kind offer of further comments; I’ll definitely take you up on that if I end up prepping an ELDP application!

Interesting discussion. I could add that when discussing language vitality, the most important criterion is usually intergenerational transmission. However, other factors can play a role as well and a discussion of such factors might be useful in arguing how endangered a language is. For example, UNESCO have a list of 9 criteria (the paper is easy to find on Google).

I’m thinking about this again as I draft a possible ELDP proposal – and at least in the African context, there is some discussion about the connection between socio-economic development and language endangerment. A short description here with some relevant references: Is Barayin an endangered language? – Joseph Lovestrand