A chat with Sal Martinez, @AwiShna

Sal Martinez is a Trustee of the Point Arena Schools District Board of Trustees, former Secretary of the Manchester Band of Pomo Indians, amateur linguist and Tribal historian.

He also happens to be a friend of mine (and incidentally of @neilalexanderwalker!), and I thought this community might be interested to learn a little about his work on his own and related Pomo languages.

We’re just going to do an informal back-and-forth here. If anyone has a question please feel free to jump in!

So Sal, thanks for chatting with us! Maybe you could just start by introducing yourself? The photo makes it obvious that you live in one of the most beautiful places in the world, Northern California! 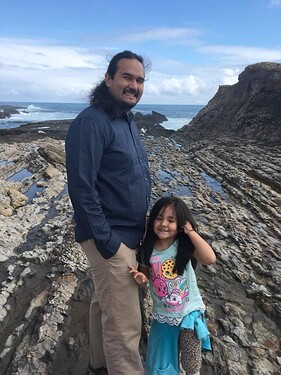 Thankful Pat! Hello y’all. My name is Sal Martinez. I ma from the west water (the coast), I live on the Manchester Rancheria. I have two kids. My oldest son is 14 years old, his name is Salvador. My little daughter is 8 years old, her name is Maya. My wife’s name is AnnMarie Sanchez. Happy to talk right now.

Thanks for sharing your language with us Sal! For the sake of those not familiar with the Pomo languages, there are seven languages in the family (in alphabetical order): 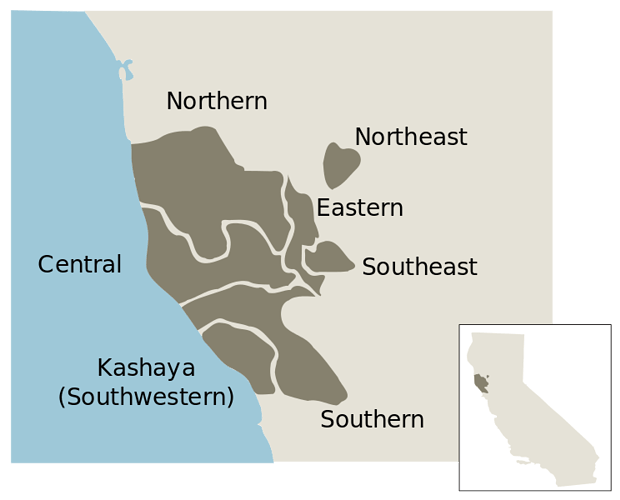 Your family’s language is what is now called Central Pomo. Can you tell us something about your relationship to the language? Did you grow up with awareness of it, or was it something you discovered when you were older?

Yeah! Central Pomo language is something I was aware of for as long as I can remember but it wasn’t until after graduating high school that I wanted to know more about it. It wasn’t until in recent years, ever since Berkeley started digitizing some of the archives on California and other Indigenous languages that I learned the name “Central Pomo” that linguists identified our language as. Gram (my grandmother) only called “Indian language” or ya:kʰe ča:nó “our language.”

Just a little side note regarding the map: though Central Pomo language does range from coast to the valley, linguists have classified the Central language into two subgroups, boya (coast) and yokaiya (south valley). Though most of the words and how they phrase things is mostly the same, there’s some words that make yokaiya distinct from boya. One example is the word for “blackberry”:

Hi, thanks for writing this! How was/is Central Pomo used in your family such as with your Gram? Is it something your wife and children are or would use? What was the place of various languages (English, Central Pomo, ? ) in every day life?

I looked up the ISO 639 codes, for anyone’s convenience:

According to CLDR’s grouping data, all of these are under the collection "Hokan languages - hok"

My gram (RIP) would use it on occasion, so very little. She would say some words while she was praying (which I understand them now!) but nothing much to everyday things. When I did ask her how to say things, she did know quite a bit. She was very honest when she didn’t know how say or word something.

My mom would scold us when my brother and I would fool around too much and she would say ʔé:::! k’uc’a! “Geez! Bothersome!” Or ʔé:::! ma:šʔudu! “Geez! Dumb thing!” (ma:šʔudu is not something bad, or should be taken as an insult or abusive, in this context.) That’s something I remember vividly! Haha.

The wife is a Citizen from the Fort Bidwell Indian Community (Northern Paiute), from Alturas, CA. She is a teacher at the Elementary school here in Point Arena, CA and works as the Tribal Liaison. We made some sweaters for the Native Youth Club that have Central language on them that read to: šabanim, ʔa: mnečkʰe “teach me, I will learn.” She’s been teaching the Native students how to say it. As for the home, my kids aren’t too interested in it. Although, when I do share language with them and talk about how its broken down, they ask more about it.

To promote language to a wider audience, I teach a Zoom group on how to read text. They come from different groups among the several Bands of Pomo Tribes. I figure, since most of them are on the Facebook group “The Pomo Language Discussion Group,” when linguists or learners post language in text, they are able to read it. Been working with them since late June of last year and they are getting the hang of it! They number about 5-7 but its a start!

most of them are on the Facebook group “The Pomo Language Discussion Group,” when linguists or learners post language in text, they are able to read it. Been working with them since late June of last year and they are getting the hang of it! They number about 5-7 but its a start!

This is something I was hoping to get to — glad it came up! One of the things you do regularly in the Pomo Languages Group on Facebook is to share transcriptions of scanned fieldnotes from the California Language Archive at Berkeley.

So you start with something like this, and transcribe it yourself, and present it in a form like this: 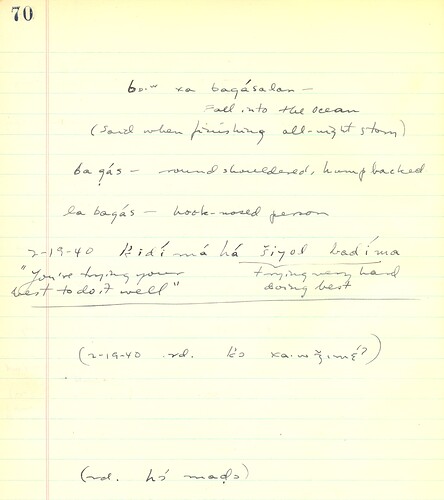 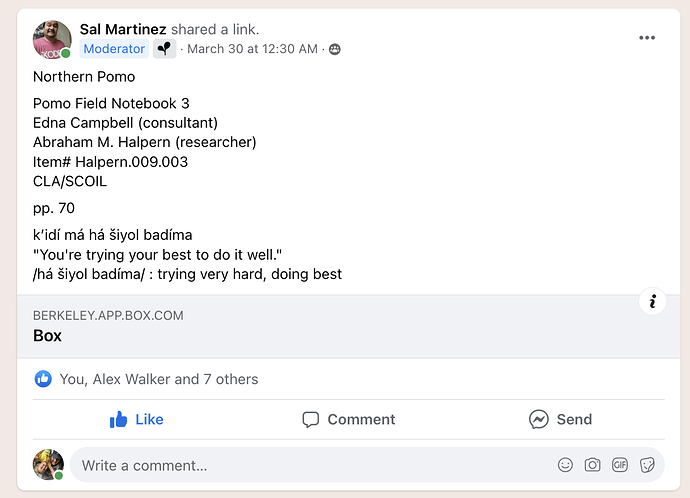 You’re really digging in and transcribing with the symbols the original linguist used. How do you handle transcribing in that complex orthography? Do you use a specialized keyboard? What has been the reaction of the members of your forum to your transcription work?

I also notice that you’re transcribing Northern Pomo here. Do you have a family connection to that language as well, or have you simply become interested in working on all the Pomo languages?

In Google Docs, it has an option to use IPA so I use that when I work on my laptop. Since I use the symbols more often now, I ended up buying an IPA keyboard from the Play Store. Super useful.

I think its recieved pretty well. Every so often there are folks that talk against the text, how the researchers documented the languages visually, creating “separation” among the Tribes, yet they use English representations (like “ah” as opposed to /ʔa:/) to write out words “how they heard it.” That creates so much more confusion among possible learners. The bigger demand though is video and audio posts, which I’m not too comfortable with. Perhaps I’m just being too skeptical in thinking where that video or audio of me pronouncing words will go, not having total control over it. At this point, I feel like folks just need to break out of their comfort zone and learn the text. That is really the future of how we’re going to learn our language.

I dived (well, more like caved) into transcribing Halpern’s notes on Northern Pomo language because I don’t see very much Northern language posts in the FB page. That’s really why I got into transcribing the other Pomoan languages. Representation is indeed important. Out of that though, I’ve learned so much more about the different sounds in each of the languages. Like Northern, for instance, has a voiceless velar fricative /x/ (something my good friend Dr. Walker shared with me in how it’s pronounced) which isn’t present in Central Pomo language!

Because I’ve been transcribing Northern language, I feel like I understand even where early researchers came up with the name “Pomo.” /pɔ/ or /po/ means “people” and /mɔ/ or /mo/ means “them.” Something like that.

In Google Docs, it has an option to use IPA so I use that when I work on my laptop. Since I use the symbols more often now, I ended up buying an IPA keyboard from the Play Store. Super useful.

Huh, interesting. Do you mind sharing what the name of the add-on you used is?

Are you using Google Docs for all your transcription work?

Also, for got to reply to your comment about the map:

Just a little side note regarding the map: though Central Pomo language does range from coast to the valley, linguists have classified the Central language into two subgroups, boya (coast) and yokaiya (south valley). Though most of the words and how they phrase things is mostly the same, there’s some words that make yokaiya distinct from boya. One example is the word for “blackberry”:

I’d be happy to help you fix this. (I made that map and put it on Wikipedia years ago

). Is there a map you recommend that we could use to update it? Alternatively we could just add the labels within the Central Pomo area. (Come to think of it, we could probably use a whole topic just on building language maps…)

In Google Docs, I use the “insert” thats labeled “special characters.” The cool thing about this is if you’re not sure where to look or don’t know the name of the symbol you’re looking for, you can draw it! 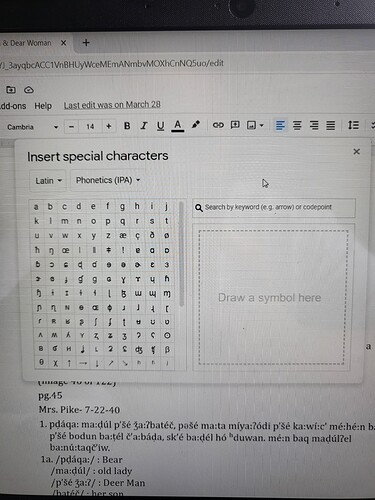 On my phone, I bought this IPA keyboard from the Play Store. Been my go-to ever since 2018!

Regarding the map, perhaps throw something in the footnotes about it. Visually showing the sub-groups, I think, would just confuse people. But then again, I could be just underestimating folks.

Are you using Google Docs for all your transcription work?

I missed answering this question! Yes, I use Google Docs for all of my transcription work. Another thing to note too is in the Google Drive where all the Docs are saved, if I can’t remember exactly which notebook or work that has a particular word or elicitation, I can type in a word like “blackberry” in the Drive and it will pull up the docs that contain that word. Definitely makes it less of a hassle to track down stuff.